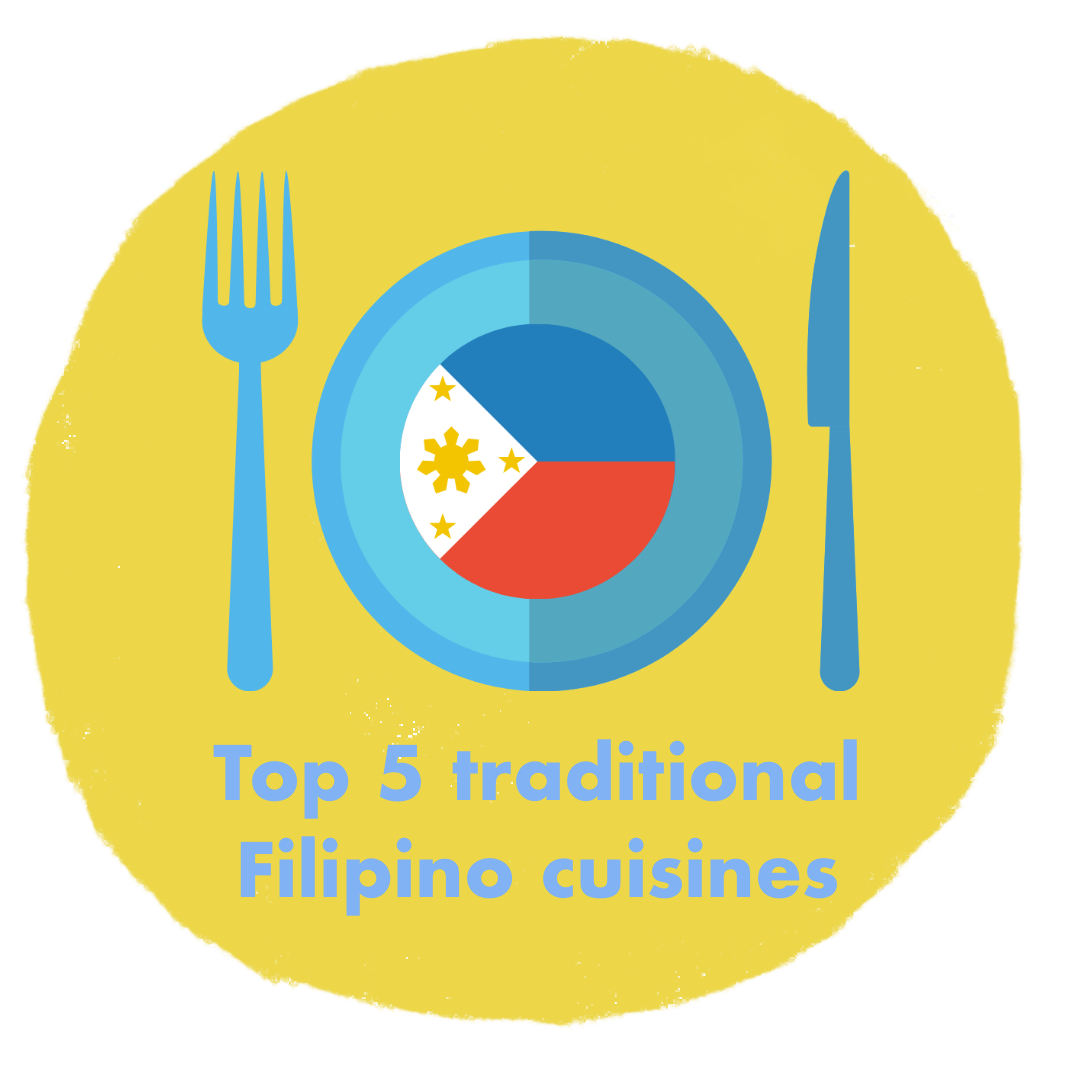 Filipino cuisine comprises a wide variety of food from more than a hundred distinct ethno-linguistic groups that are scattered from the different cities, provinces, and islands of the Philippines. Over many centuries, the food production and food processing styles have evolved from their Austronesian origins (shared in Malaysia and Indonesia) to a mixture of Indian, Chinese, Spanish and American influences that have enriched the cultures of the Archipelago as well as other waves of influence adapted to indigenous and local ingredients.

Filipinos traditionally eat three main meals a day: breakfast, lunch, and dinner. It is also commonly complemented with an afternoon snack. The main meals are usually eaten with a viand and rice. It’s not considered a meal without rice. An afternoon snack is similar to the concept of afternoon tea except that most prefer to have a snack with coffee or cold drinks. Typical afternoon snack are local breads and pastries like pandesal (salt bread), ensaymada (buttery brioche covered in grated cheese and sugar), hopia (pastries similar to mooncakes but with different flavor of fillings), and empanada (savory, meat-filled pasties). There are also local fried treats consumed as a snack like turon (wrapped fried banana), banana cue (sugar coated banana on stick), kamote cue (sugar coated sweet potato on stick), and a lot more. There are also some traditional treats made from sticky rice like kutsinta (steamed rice cake), sapin-sapin (layered glutinous rice and coconut), palitaw (rice cake), biko (sweet rice cake), suman (another type or rice cake), bibingka (another type of rice cake), pichi-pichi (steamed cassava flour balls) and a lot more that are either consumed as a dessert or snack.

“Rice is life” -- a typical statement you would hear from Filipinos wherever they may be. Here are five traditional Filipino cuisines that are typically eaten as a main meal for lunch or dinner with rice.

This is probably the most famous Filipino food of all. It is produced by bathing the meat (typically chicken, pork or both) in soy sauce and vinegar, adding peppercorns and bay leaves for that special flavor and leaving it for a few hours to really soak the flavors in. There are also different styles of cooking adobo across the Philippines. Some don’t use soy sauce, some add coconut milk, and some add lots of chilies.

This is another classic dish with different variants including sinigang na baboy (pork), sinigang na hipon (shrimp), and sinigang na isda (fish). It is a soup dish that has a sour broth usually made tangy by tamarind or kamias (cucumber tree) and filled with different vegetables and a meat of choice.

Another world famous Filipino food is a fully-roasted pig with perfectly crisp skin and juicy meat called lechon. It is slowly roasted, usually stuffed with lemongrass, tamarind, garlic, onions, and chives, and is then roasted on a large bamboo spit over an open fire. It is almost always served at any grand Filipino gathering or fiesta.

There are many different variants of pancit (noodles) in the Philippines and this stir-fried (guisado) version may be the most famous variant. It is popular among foreigners with Filipino friends due to its usual presence at family parties. The noodle dish is a symbol for life and therefore a key element in many celebrations. Sliced vegetables and meat (all cooked in broth, soy sauce and fish sauce) complement the sautéed noodles, and kalamansi (local lemon) is squeezed over upon serving.

This is a type of rice cake native to the Philippines and most popular during the December holiday season along with puto bumbong. Commonly sold along the street, this filling treat is traditionally made from galapong (milled glutinous rice), coconut milk, margarine, and sugar. Some variants may include salted egg on top.

These are just five of the many dishes that define the Philippines. With over 7,000 islands abundant with coconut, seafood, rice grain and other local ingredients, each archipelago has their own specialty. Many Filipino communities in Canada offer these great food choices. Some have infused a modern spin to these traditional cuisines while some have kept the authentic taste from the motherland.

Other articles in recipe

For the next installment of RemitBee Family Recipes, we will explore the flavours of Nigeria, the most populated country in Africa.

Sri Lankan indigenous and traditional foods have a long history and special practices that date back thousands of years.

We’ve collected family recipes from immigrants across Canada for our Remitbee Recipe series.