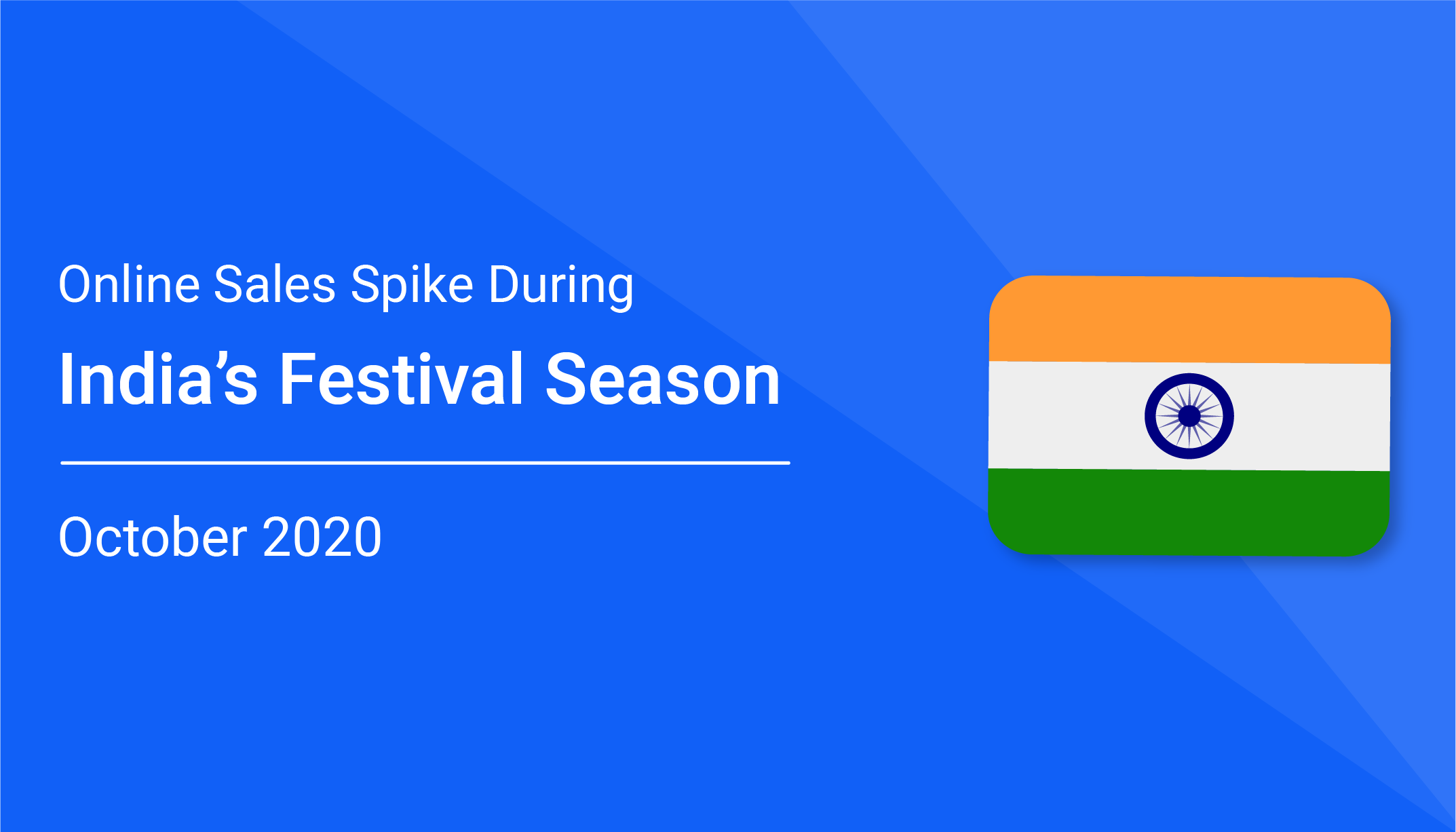 Throughout the COVID-19 quarantine period, online shopping has become the new normal for most households around the globe. From groceries to luxury goods the internet has allowed companies to grow at a rapid speed to keep up with high consumer demands.

This month India is hoping to recover some of the money lost since March, through online promotions surrounding the festival season. From celebrations like Navratri to Diwali, this year will look much different than ever before. With climbing case numbers, there has been more emphasis placed on online celebrations to keep Indian’s joyful during the pandemic.

India’s festive season this year is estimated to increase online retail spending by 34%, according to Forbes the country is expected to generate $6.5 billion in sales from October 15th to November 15th with 60 million citizens shopping online.

75% of sales will be coming in from October 15th-21st during Flipkart’s Big Billion Days event and Amazon’s Great Indian Festival. “Since its launch in 2014, Flipkart has led spending during the festive month due to its strength in the smartphones and fashion categories, which account for 50% of total online retail sales in India” while Amazon relies on its Prime members. The ‘Great Indian Festival’ will run until Diwali allowing shoppers to frequently shop throughout the month.

On Sunday Amazon said “the first two days of its annual festival day sale this year turned out to be the biggest ever opening, with over 1.1 lakh sellers receiving orders from about 98.4% of the country’s pin codes” within a 48 hours period.

Manish Tiwary, the Vice President of Amazon India stated that over 1.1 lakh sellers are receiving orders from 91% of new customers and 66% of new Prime sign-ups from small towns.

Amazon also explained that 91% of new consumers come from smaller cities and sales can be accessed in Hindi, Tamil, Telugu, Malayalam, and Kannada, "it’s truly Bharat’s biggest celebration on Amazon ever” Tiwary adds.

Electronic appliances of all sorts are being offered at great prices online this month, from fridges to tablets, the sale has something to offer for everyone. When it comes to smartphones, the “total iPhones sold on Amazon in one day were more than the total iPhones sold in the entire festive sale period last year.”

Keeping in mind that deals will not be lasting for very long, customers should pay close attention to discounted prices as some are only offered available within a specific time frame. Some deals are only offered to premium members as well.

Some sales are meant to be marketed as jaw-dropping, so be wary as these websites tend to offer discounts on already inflated prices. Compare and confirm with numerous websites that the original cost is already in your range.

Take your time with selecting products but don’t wait too long, and always double-check your shipping cost to evaluate if your purchase is actually worth the money. If you’re not a premium member for sites like Amazon, this may be a good time to sign up and receive additional discounts off your entire order including shipping if you become a Prime member.

Forbes also reported that Amazon has set up 10 new fulfillment centers over 2020, making India’s total 60 centers in 15 different cities. “Amazon has reported a 30% growth for online merchants compared to last year and 60-80% increase in new seller registrations since February.”

Grocery shopping will also be one of the fastest-growing categories online as India is quickly becoming the largest hot spot for COVID. Now online groceries are used by all demographics and families are quickly developing new lifestyles while staying safe.

The Indian economy is slowly bouncing back from COVID-19, Google’s Mobility Report explains how “retail-and-recreation-related mobility declined by 90% in metro areas for the month of April; the effect on tier I and tier II cities was slightly less severe, at 86% and 80% respectively.”

After mass job losses due to a decrease in consumer spending throughout the summer, when September hit Forbes analysts found that there was “a marked improvement, with mobility recovering by at least 40% for all cities, with tier 2 cities leading the charts.”

Spending habits have shifted to online platforms that are still trying to find their footing meaning the “Indian economic contraction will be more severe than previously anticipated, with the latest forecast projecting a decline of 10.3% in GDP for 2020 compared to the forecasted decline of 4.5% release in June.”

India is likely to bounce back by 8.8% in 2021 which will allow the country to begin “regaining the position of the fastest-growing emerging economy, surpassing China’s projected growth rate of 8.2%” according to the International Monetary Fund’s (IMF) latest ‘World Economic Outlook’ report.

The IMF and the World Bank predicts that global economic growth is expected to contract by 4.4% this year and recover to 5.2% in 2021. India’s GDP contracted at a more drastic matter in Q2 2020 and is likely to happen again before the year’s end if COVID numbers continue to rise.

The report also states that “the spread of the virus and containment measures have severely disrupted supply and demand conditions in India.”

If the pandemic in India can be controlled by February 2021 through social distancing, washing hands and wearing PPE, the economy has a fighting chance to bounce back by the middle of 2021. With 7.6 million confirmed cases, 6.73 has recovered and 115K deaths relating to the virus, India maintains a sixth of the world’s total COVID cases and 10% of world deaths.

“Last week, India reported an average of 62,000 cases and 784 deaths every day” and more than a million people are being tested daily according to a BBC report.

Scientists commissioned by the Indian government suggests that “without the lockdown in late March, the number of active cases in India would have peaked at more than 14 million and that more than 2.6 million people would have died from COVID-19” which is 23 times the current rate. The scientists predict a new peak of 2.6 million active cases by the end of October meaning Indians “must not relax. There is a human tendency to think that the worst is behind us.”

In January, a medical student returned from Wuhan, China to Kerala where India’s first COVID case was reported. By May there were zero cases and epidemiologist Jayaprakash Muliyil stated that “I remember saying that Kerala had achieved a viral miracle.”

This didn’t last for long as Shashi Tharoor, a senior opposition politician and member of parliament at Trivandrum said “when lockdown travel restrictions were lifted, people came flocking back to the state and it became impossible to curb the re-entry of infected cases.”

These facts should warrant Indians to be extremely cautious during festival season as large gatherings and public outings may lead to a rapid spread of infections, delaying more holidays and celebrations in the future.

Dr. Bhramar Mukherjee, a professor of biostatistics and epidemiology at the University of Michigan says that “if the natural experiments across the world tell us anything, there will be another peak, when and how high is hard to tell. The key is to keep cases and hospitalizations lower than the hospital capacity at a given location and keep practicing the public health guidelines.”

As families and friends are now eager to get together during India’s festival season, there is still a possibility of numbers to spike drastically within the next month due to increased travel in and across cities. Sticking to virtual celebrations on platforms such as Zoom and spending time shopping online might be India’s safest bet in order to responsibly recover their economy over the coming months.