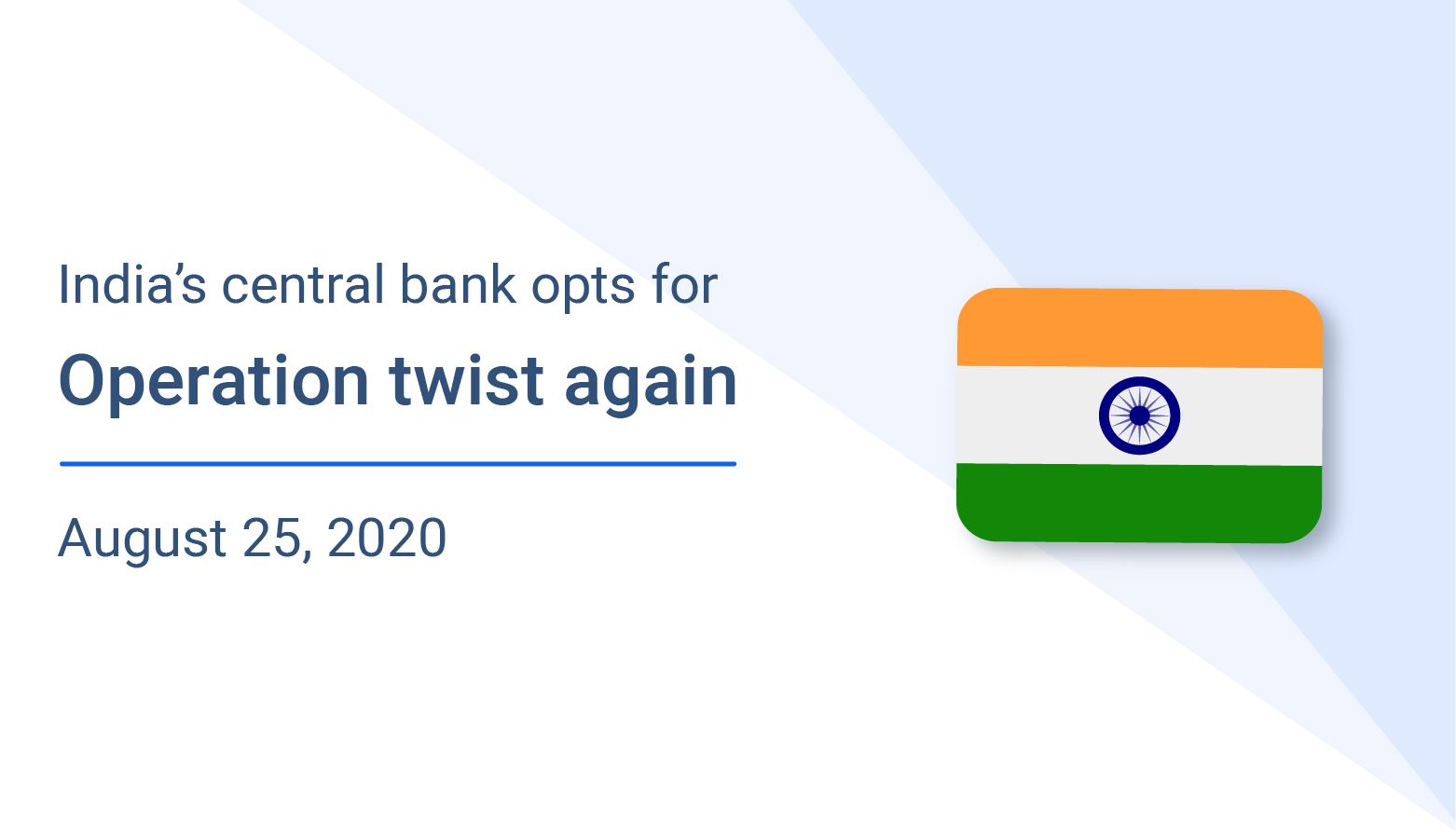 The Reserve Bank of India (RBI) has yet again decided to go in for Operation Twist. Typically, it involves simultaneously buy and sell government bonds. The objective is to bring down the interest rates on long-term government bonds.

The central bank said it would conduct the bond-swapping program under open market operations (OMOs) for ₹10,000-crore each on 27 August and 3 September.

The central bank conducts OMO sales to drain liquidity in the financial system and OMO purchases to infuse liquidity.

As part of the program, the RBI intends to purchase securities with tenures between 4 and 12 years, and sell short-dated securities maturing between October and November.

Bankers expect the move to drain liquidity in the system and bring down long-term interest rates. The move is also expected to boost private-sector borrowing.

The Reserve Bank last used this tool in July to accelerate monetary transmission in the system.

The RBI, in the meantime, said that “an assessment of aggregate demand during the year so far suggests that the shock to consumption is severe, and it will take quite some time to mend and regain the pre-COVID-19 momentum. “Going forward, government consumption is expected to continue pandemic-proofing of demand.” Private consumption would come back gradually with non-discretionary spending leading the way until a durable increase in disposable incomes enabled discretionary spending to catch up, the central bank said in its annual report for 2019-20, which was released on Tuesday.

According to the RBI, the effectiveness of policy measures undertaken to address Covid-19 related stress will play a critical role in preserving the resilience of India’s external sector. “The ensuing year is likely to be challenging due to a highly uncertain global trade and investment environment, and extreme fear and uncertainty about the intensity and spread of COVID-19. While terms of trade gains may provide some respite, the outlook is uncertain for exports, remittance inflows, and the tourism sector,’’ the report said. The prospects for capital flows faced uncertainty due to their sensitivity to shifts in the global macroeconomic outlook, it added.

At end-March 2020, India’s external debt increased by $ 15.4 billion (i.e. 2.8 per cent) from its level at end-March 2019, primarily on account of commercial borrowings. “The increase in external debt was partially offset by valuation gains of US$ 16.6 billion resulting from the appreciation of the US dollar against the Indian rupee and major currencies (such as euro and SDR). Excluding the valuation effect, the increase in external debt would have been US$ 32.0 billion instead of US$ 15.4 billion,” the report said. Commercial borrowings formed the biggest component of external debt, with a share of 39.4 per cent. This was followed by non-resident deposits (23.4 per cent) and short-term trade credit (18.2 per cent). As a ratio of GDP, external debt increased from 19.8 per cent at the end of March 2019 to 20.6 per cent at end-March 2020. There were some encouraging signs, however. The share of short-term debt (on both original and residual maturity basis) in total debt declined. Similarly, foreign exchange reserve cover of imports and short-term debt (on both original and residual maturity basis) improved during the year, indicating sizeable accretion in reserves.

A slew of measures was taken in 2019-20 to beef up investor confidence. These were:

· Rationalisation of KYC (know your customer) norms for foreign investors.

· The Reserve Bank also introduced a slew of measures to encourage foreign inflows, which included, among others

· (i) Hike in the short-term investments by FPIs from 20 per cent to 30 per cent of the total FPI investment in central government securities (including Treasury Bills) or state development loans (SDLs).

· (iii) Flexibility to transfer investment under the general investment limit to the VRR scheme.

· (iv)Expansion of the scope of instruments for investments under VRR to include exchange-traded funds investing only in debt instruments.

· For 2020-21, the FPI limit in the domestic corporate bond market has been further raised from 9 to 15 per cent of the total outstanding stock of corporate bonds.

“Notwithstanding several confidence-building measures and enhancement of FPI limits, FPI activity in 2019-20 was largely influenced by global developments. Utilisation of FPI limits dipped to 37.5 per cent in the government debt market (both G-sec and SDLs) and 54.5 per cent in the corporate debt market by end-March 2020 from 54.0 per cent and 75.9 per cent, respectively, a year ago,” the RBI report said.