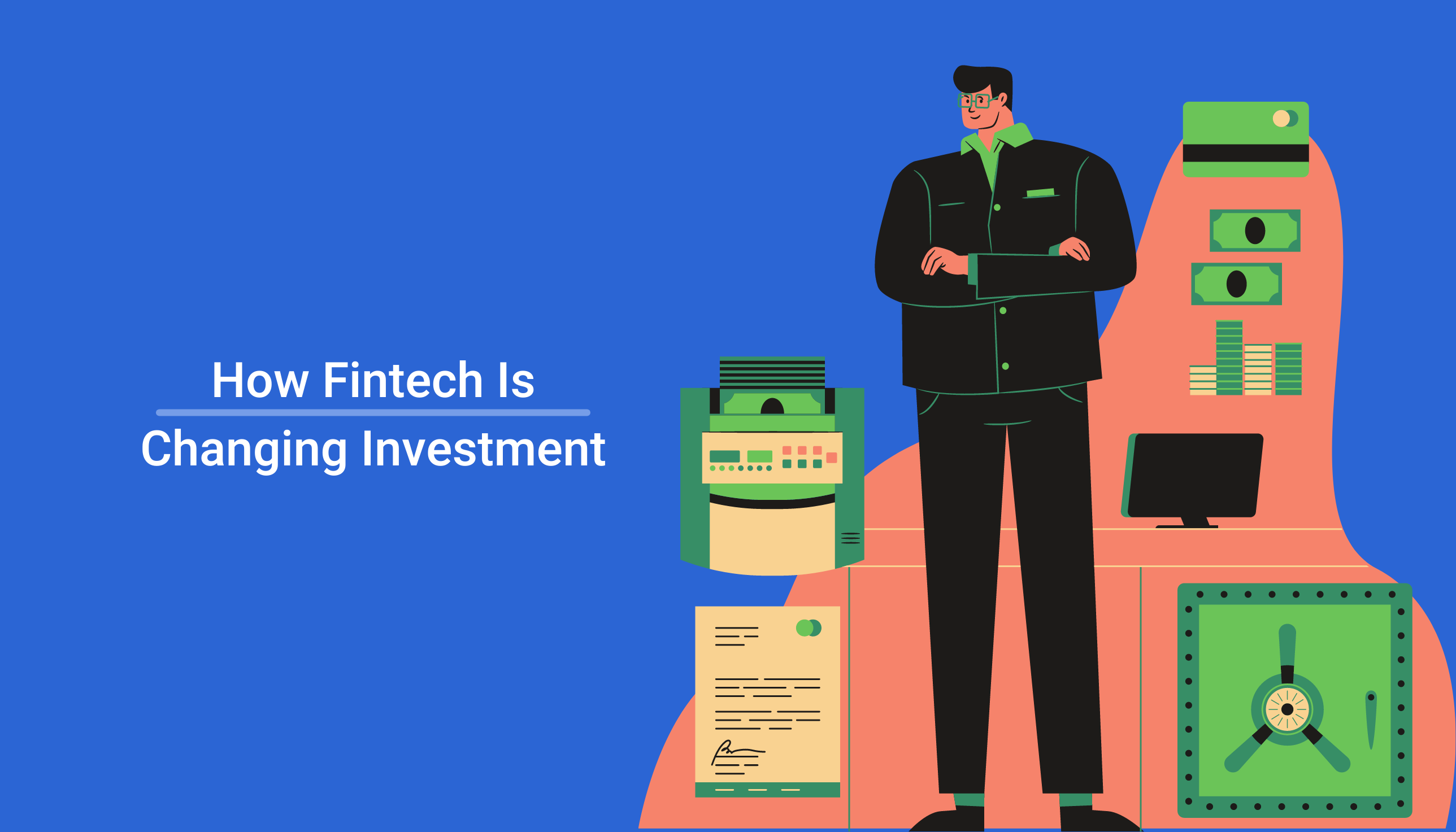 How Fintech is Changing Investment

Unless you were wealthy or a professional, investing was a mysterious world for Millenials. Besides wealth and experience, professional investors leveraged advantages such as advanced technology, research teams, and lower fees per trade.

All these factors together made investing intimidating for those with limited resources.

That is until the past few years. Innovations have closed the gap and encouraged younger people to become more involved in investing.

And that’s what we’ll delve into today. In this post, we’ll shed light on how this has been made possible, the opportunities it’s brought about, and then we’ll talk about its role in the popular GameStop situation.

The Rise of the Micro-Investor

A huge barrier to entry when it came to investing was a lack of capital. This came in the form of the following:

Account minimums: Brokerage accounts required you to have a minimum balance, often starting at $500.

Fees per trade: Every time you made a trade, there would be a $10 fee, with a $5 fee per trade being considered a discount.

When $500 could mean the difference between eating or not that week, investing was too hefty an investment and risk for many younger people.

Then came Fintech apps like Robo-advisor Wealthsimple and trading platform Robinhood, which helped even out the playing field and opened up investing to practically anybody. These fintech eliminated account minimums, trade fees and offered maintenance fees starting as low as $1 per month.

Robinhood challenged the traditional system by introducing free trades. Robinhood’s CEO realized that popular brokerages charged per trade even though it costs them almost nothing to execute the trade themselves. Robinhood’s success essentially forced traditional trading brokerages like TD Ameritrade and Charles Schwab to eliminate their commissions as well to stay competitive.

Furthermore, these Fintech apps allow you to invest as low as $1 to buy fractional shares, a concept which just became popular online in 2019. A fractional share simply means part of a share instead of an entire share. This allows young investors with smaller amounts of capital to now invest and gain experience with less on the line.

These new investors were given the label micro-investor. This term is associated with retail investors like you and me, who buy fractional shares for low prices. A concept that was almost unheard of in the past.

Young micro-investors leverage their tech-savviness to further close the gap between them and traditional investors. They’re drawn to fintech apps, which provide many benefits beyond the initial capital requirements.

Though still at a disadvantage when it comes to capital, micro-investors take advantage of fintech apps and their features to save and get the most of their dollar. For starters, these apps offer a simple way to build an investment portfolio.

In the past, it was a skill for investors to know how to properly allocate the right amount of money to different asset classes while also continually rebalancing their portfolios. Fintechs make this easy for new investors.

Generally, all you need to do is choose your goal, timeline, and risk level, ranging from conservative to aggressive. The app will then leverage artificial intelligence (AI) algorithms to identify trends while also considering professional investors' experience to adjust your portfolio automatically. These apps also offer automatic rebalancing, algorithmic trading —which leverages proven investment strategies— and other services that were once only reserved for the mega-rich.

Another advantage of fintech apps is that they make investing less scary by sometimes gamifying finance, providing intuitive user interfaces (UIs), and using less jargon. The ability to explain financial concepts without jargon gives micro-investors more control over their financial life because it allows them to easily learn along the way and make educated decisions.

The power of fintech and the rise of the micro-investor is exemplified by the whole GameStop situation which originated in a Reddit forum.

Even for people not really into trading, everyone has most likely heard of the historic GameStop situation by now.

GameStop, a brick and mortar business, has been on the decline for some time now because everything is moving digital. Think Blockbuster. A lot of big hedge funds have very confidently predicted that GameStop will struggle and that their shares will decline heavily soon.

They backed their prediction by shorting GameStop stocks. If you’re not familiar with the term shorting, it’s just another way to say they’re betting against Gamestop.

A Reddit forum by the name of WallStreetBets challenged these hedge funds and decided to start encouraging each other to buy GameStop stocks in an effort to spike their value. Remember that if big hedge funds profited off the price of GameStop shares decreasing, that meant if the shares instead soared, they’d lose money. A lot of money.

And that’s what happened. With the help of an Elon Musk tweet “Gamestonks!” Gamestop's shares jumped record amounts. In fact, it increased so much that one hedge fund, Melvin Capital, is said to have lost billions.

Guess how all of this was made possible? The rise of micro-investors who initially leveraged Robinhood’s zero commissions. Though Robinhood’s actions following the flood of traffic are questionable, micro-investors have moved to other fintechs to continue going at it against hedge fund billionaires.

Robinhood chose to block the buying of GameStop shares, which disappointed many people who felt they did this to protect hedge funds. However, other fintechs kept the option to buy open. Robinhood's motives are still unclear as this is an evolving story at the time of this writing.

Let’s now switch gears a bit and talk about another notable thing these fintechs are now introducing on their platforms —the ability to buy and sell cryptocurrency.

When you invest in a stock, you’re investing in the success of a business. When you invest in a currency, you’re investing in the possibility of a currency getting stronger. Then came digital currencies, which is sort of a mixture of the two, but more comparable to stocks when trading. Note that cryptocurrency is a digital currency and you can’t physically hold it in the way you hold US dollars or Canadian dollars.

When you invest in a cryptocurrency, you’re investing in the possible success of the idea behind the cryptocurrency which is supported by blockchain technology.

Crypto trading happens on online exchanges like Coinbase and Binance, although Fintechs like Robinhood and Wealthsimple have introduced trading platforms that bring together multiple exchanges to get the best prices.

At first, many wondered if cryptocurrencies were a fad that would come and go. Many have lost millions while many others have gained millions through cryptocurrency. When determining if cryptocurrency is something you’d like to get into, here are some positives and negatives to consider. Notice that some features are considered both a positive factor and also a negative factor.

Cryptocurrency is known for its transparent nature. Whenever a transaction happens, it’s posted in a distributed public ledger. Although the two parties in the transaction are kept anonymous, the transactions are recorded to keep the system honest and prevent hackers.

There’s no central body governing nor regulating crypto, meaning that there’s no need for a middle man like a bank. Instead, it’s transferred directly from person to person (or peer to peer). This makes transfers cheaper and faster because there’s no middle man taking a cut.

1. Anonymity: Although this is on the positive list, anonymity also helps criminals perform illegal transactions, which is why it’s common in the black market.

2. Decentralized Nature: Because there’s no regulating authority, if you get scammed, it’s virtually impossible to recover that money back. Also, if the exchange you keep your money on goes out of business, you’ll have no way to get your money back. This is why a lot of people use something called a cold or hot wallet.

3. Volatile Nature: Though the stock market and foreign currency can also experience times of volatility, cryptocurrency is especially known for its volatile nature.

Take a recent event, Ripple (XRP). The organization behind Ripple is currently getting sued by the Securities and Exchange Commission (the SEC) and this has resulted in many exchanges delisting XRP and dramatically decreasing its value. It’s an ongoing thing at the time of this writing, but there’s a chance that its value will drop to zero and investors will lose all of the money they’ve put into it.

Tips for buying US stock from Canada

If you’re ready to start investing using fintechs, you might consider at one point buying US stocks. Keep in mind that when you buy US stock from Canada, you’ll have to convert your CAD to USD. Some people choose to buy US stock with a Canadian account, but the currency still has to be converted so your brokerage of choice ends up doing the conversion for you and this ends up being a costly option that can eat up your profits.

You now have an alternative.

Save on exchange rates by using our newly released Remitbee online currency exchange gives you the ability to get instant quotes from CAD to USD and vice versa, with no additional fees.

Banks have a reputation for charging their customer's high fees along with low exchange rates when they move money internationally. You could be losing about 5% of your initial transfer with banks (up to 3% fees + exchange rate margin).

Remitbee charges just .005% to .01% of the transfer while also offering high exchange rates.