The evolution of how society completes transactions has accelerated rapidly over the last 3000 years. Moving from the Hawala System, to coin and paper currency, to telegraphs, credit cards, and online money transfers—there has been continuous transitions as government structures and financial institutions adapt to the needs of consumers.

With comprehensive updates in technology, the money transfer industry has been shaped by the digital age, which has allowed payments and transfers to easily be completed on a global scale.

Before the industrialization of technology, banks, and financial institutions were the base of how to exchange and trade money on many scales. As time has progressed, the wire transfer has become an integral foundation of moving money, and still remains to be one of the most successful ways to exchange money internationally.

With the wire transfer gaining traction over the years, many private companies outside the banking space have been formed, allowing clients to facilitate transfers with a greater sense of control and independence. Banks that facilitate wire offers have a history of taking several days to be processed. On the other hand, wire transfers from smaller companies not affiliated with banks are instantaneous.

Western Union is one of the biggest names in this space, the company originally started operating as a formal telegraph service and has shifted to offering a large breadth of financial services. In 1951 the company was established as a wire transfer service and since has been successful in providing smooth service to clients.

“These transfers became possible due to the advancements in telecommunications technology and at the same time, the payment sector was entering a new era.”

Checks and cash became less prevalent over time, causing a surge in credit cards which began circulation in the 1920s; department stores and oil companies were the first to offer a courtesy card, “which was a metal card that could only be used at the store that issued it, and it had to be paid in full each month. Years later, in 1946, John Biggins introduced the ‘Charge-it’ card as a way for small businesses to interact with local customers, which hinted at the beginning of credit cards.” The Diners Club card was introduced in the 1950s which was one of the first real credit cards ever established. After a few years, Visa credit cards were created in 1958, and in 1966 MasterCards came out with theirs; “by the early 1970s, Americans had over 100 million credit cards.”

In 1973 the Society for Worldwide Interbank Financial Telecommunications, commonly known as SWIFT, was created which changed how the credit system operated completely. Beginning with 7 banks, “SWIFT became a global provider for secure financial messaging through a system of international banks.” SWIFT now operates with thousands of banks, making this form of communication trusted internationally.

The money transfer industry then moved into the wave of electronic funds transfers and the use of ATM’s, meaning that financial institutions started adapting to the times and began to process payments electronically as well.

Since the 1990’s there have been technological advancements such as money transfers via cell phones and radio frequency identification (RFID). With easier access and more knowledge of these resources, the demand for e-commerce solutions has grown with each passing year, making money transfer services an essential part of the lives of both individuals and businesses.

From this demand and growth, companies such as Remitbee are now able to support your money transfer needs. Our currency converter and online money transfer services allow you to complete international transactions with the lowest fees possible. For more information on how to use our services visit www.remitbee.com.

Our company always stands for full transparency and passing as much value as possible to the customer. So, on top of our best exchange rates and 0 fees, we want to give you even more!

For a limited time, Remitbee offers a bonus for you. Sign up today, and get 15$ towards your first money transfer. Simply click on the promo code below! 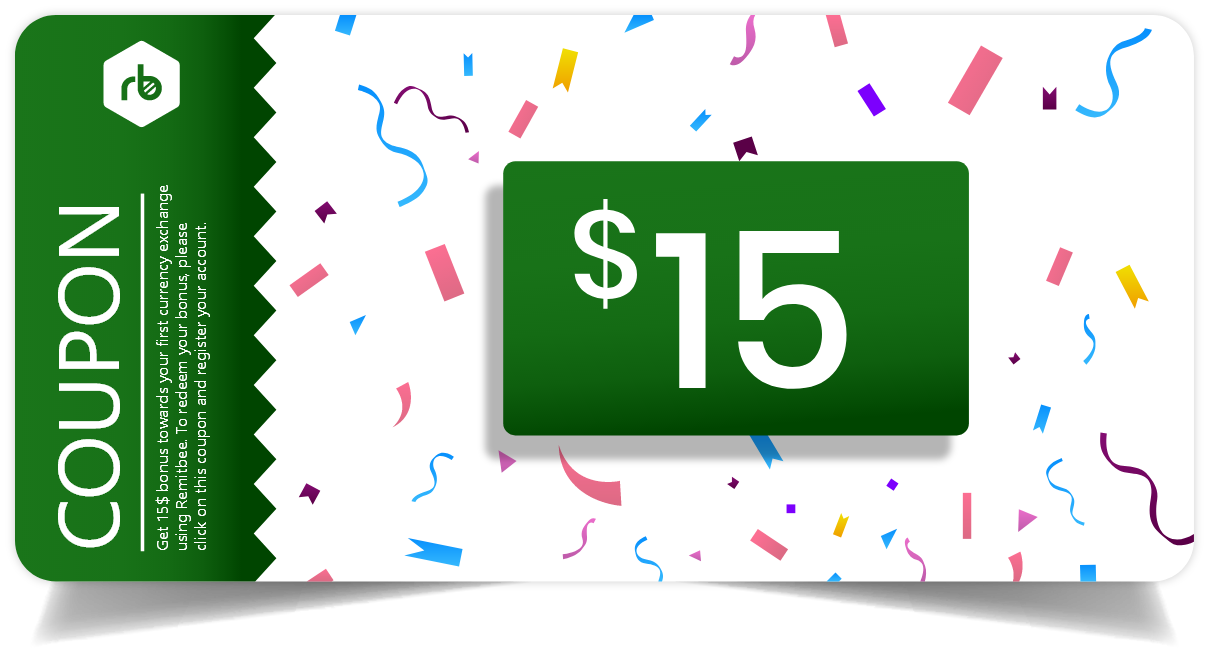