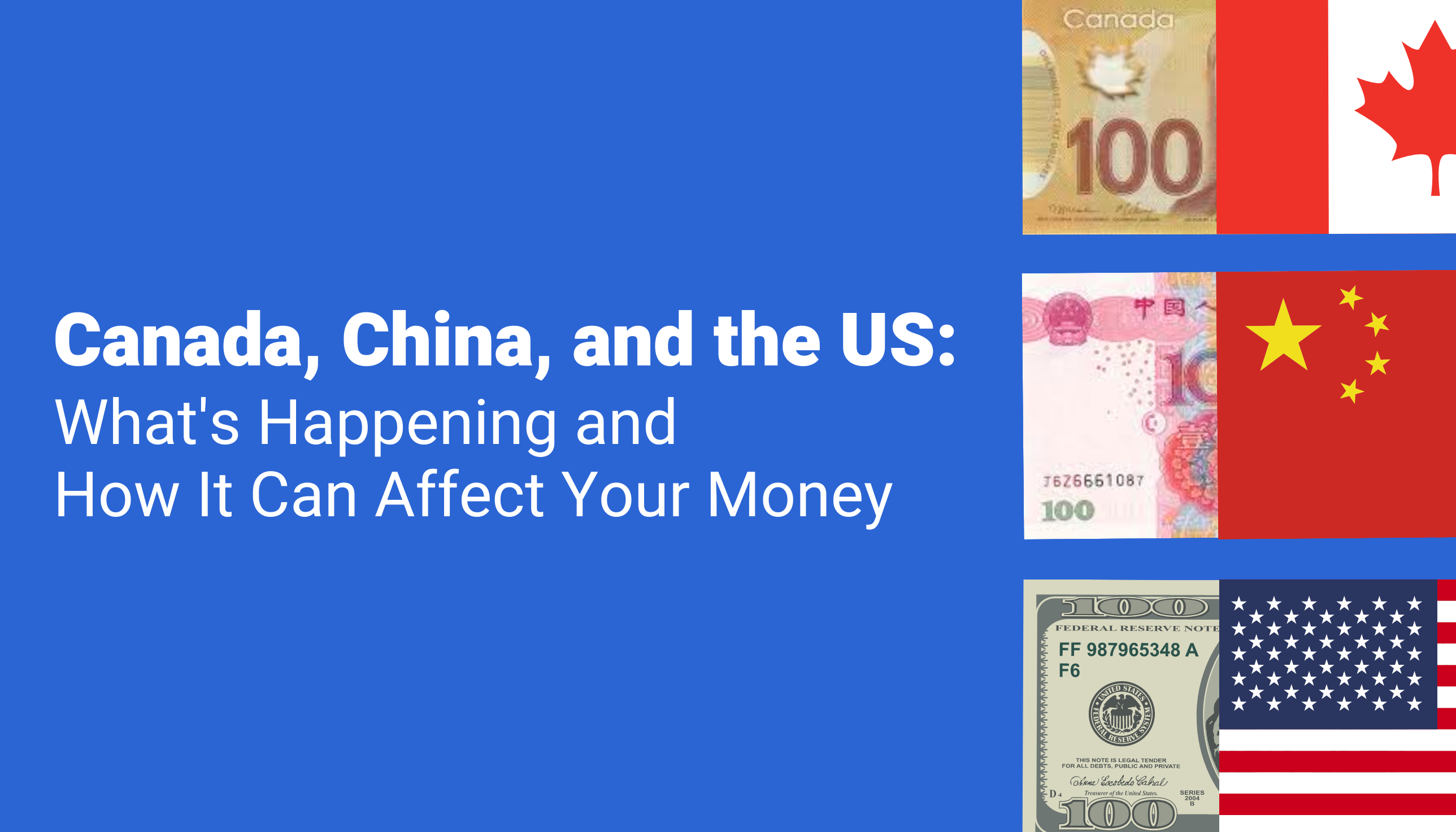 Canada, China, and the US: What's Happening and How It Can Affect Your Money

You’ve likely heard that recently Canada may have reached a tipping point in their relationship with China. To understand what’s happening, how the United States is involved, and how this may affect Canada’s economy and the wealth of its citizens, we’ll need to start from the beginning.

Canada–China relations all began back in 1942 when Canada sent an ambassador to China. Prior to this, Canada had been represented by the British ambassador. Relations held until the Communist victory (1949) in the Chinese Civil War, which caused a break in relations that lasted until 1970, when Canadian Prime Minister Pierre Trudeau became one of the first Western leaders to recognize the People's Republic of China.

So, there’s definitely a degree of history between the two countries, but even back then it wasn’t always ideal.

A Worsening Chain of Events

Relations between Canada and China began a practically consistent negative trend around 2017. The year contained the detainment and harassment of Globe and Mail journalist Nathan VanderKlippe as he was investigating the Chinese government's re-education centres in the Xinjiang province, a failed attempt at free trade, and the much-discussed death of Liu Xiaobo, a Nobel Peace Laureate who died of liver failure in Chinese political custody.

2018 brought a Canadian government block of the sale of Aecon, the construction company that built the CN Tower and has access to many governments and military construction plans, from being purchased by the Chinese state-owned enterprise CCCC International Holding. On December 1, 2018, Meng Wanzhou — CFO and deputy board chair of Huawei — was arrested in Vancouver at an extradition request by United States authorities on suspicion of violating US sanctions against Iran. Trudeau said that the federal government was aware of the intended arrest but had no involvement in the process, but the Chinese government protested the arrest made by Canadian authorities. The arrest had ramifications for the bilateral ties of both countries.

On December 10, 2018, former Canadian diplomat Michael Kovrig and Michael Spavor, a Canadian consultant linked with North Korea, were detained by the Beijing Bureau of Chinese State Security. As of December 12, the Chinese government had released few specifics as to the reason for the detention, but soon declared it was because of “stealing state secrets”. However, it was clear that this was an instance of hostage diplomacy for Ms. Meng. Seen at large as a major bullying tactic, relations between the two countries proceed to break down further.

Subsequently, China applied economic coercion on Canada by suspending imports of canola oil, beef and pork from Canada, and political protests in Hong Kong the same year were met with extreme violence. Later on, in 2019, China warned the Canadian government against granting asylum to political figures of Hong Kong, stating that it would be considered as acting directly in China’s internal affairs. In terms of 5G in Canada, Huawei was also passed up in 2019 for Ericsson and Nokia alternatives.

On 6 October 2020, a group of 39 countries, including Canada, the United States, most of the EU member states, Bosnia and Herzegovina, Albania, Australia, New Zealand, Haiti, Honduras, and Japan, made a statement at the United Nations to denounce China on grounds of its treatment of ethnic minorities and for curtailing freedoms in Hong Kong.

Also in In October 2020, a Canadian parliamentary committee said that China’s actions against ethnic Uighurs in Xinjiang province constituted a genocide. This came a year after 22 UN ambassadors signed a joint letter to the UNHRC to condemn China’s mistreatment of the Uyghurs and other minority groups, as well as urge the Chinese government to close the Xinjiang camps. In response, the Chinese government warned Canadian lawmakers to halt their "blatant interference" in internal Chinese affairs. By November, Canadian UN Representative Bob Rae called on the UN to investigate evidence of genocide, and in February the House of Commons of Canada approved a motion by 266–0 votes, formally recognizing that China was committing genocide against its Muslim Uyghur minority in Xinjiang. It should be noted that Prime Minister Trudeau and most of his Cabinet did not participate in the vote.

China has just recently lashed out at Canada for signing the declaration.

That’s a lot of issues pilling together, and with each new addition, hostilities rise.

Tensions are high as Canada calls on international and neighbouring parties to help them find justice for the minorities in China as well as return the two Michaels home safely.

According to a recent study published by the Pew Research Center, 73% of Canadians now hold an unfavourable view of China, and other countries are hitting record highs for negative views of the country as well. Recent ‘Asian-hate’ could be seen as a direct result of these mounting views, coupled with the stresses and uncertainties that have come from the COVID-19 pandemic.

Experts say that the economic fallout with China would not result in total devastation but it would offer a very painful lesson in Canada’s dependency on its second-biggest trading partner. And a very important point to know about Canada-China trade is that of the hundreds of billions of dollars changing hands every year, Canada is importing more than three times more from China than we are exporting. This means the current reality is that economically, we need China more than it needs us. British Columbia for example, which sends 15% of all its products to China, would get hit particularly hard.

Agriculture industries will likely suffer the biggest blow should economic relations with China collapse completely. Canada will then have to find other countries to trade with, which is possible but understandably a feat in itself.

Investors with interests in China or Canada may have to keep a closer lookout, and Canadian citizens may very well have to re-evaluate the nature of the economy they operate in. While rates are good, many may seek to convert their CAD to other currencies like USD, while others may be interested in starting investments now with the future looking so rocky.

Canada will pull through. With new talks forming between our country and the United States, our economy which has suffered from COVID-19 may see new avenues open soon. As it stands, we’ll have to wait and see.

Need to change your currency between USD or CAD? Check out Remitbee online currency exchange